Everyone is in agreement that the corona virus is NOT the killer. It is rather the cytokine storm. So what is that? It’s gotta be something really bad because it can kill us.  So what are cytokines? And why are they so MAD at us? And, more to the point, how can we stop them?

Let’s say we have a macrophage, a white blood cell. In Greek, macrophage means “BIG EATER”.  So let’s call him “Big Bubba” the defender. 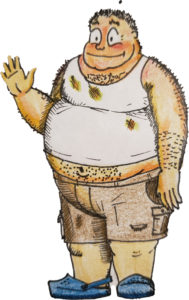 Big Bubba is ‘front line’. He’s the first to be touched by the opponent, 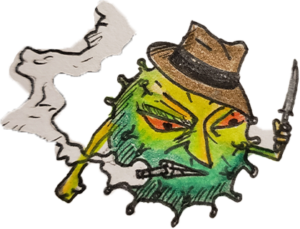 Badass V, the virus, and he gobbles it up. Yep, he eats it. Badass dies in Bubba’s iron gut stomach so Bubba is fine with that. But let’s pretend that that tasty viral morsel was like a combination of garlic and onions and now our corpulent and amiable, but flatulent macrophage, Bubba, is quite the offensive one, (secreting antigens).

Naive T is really just a mellow dude, but when he gets a whiff of his gas-passing friend, macrophage Bubba, and those fetid fumes (antigens) produced by the indigestion of Badass V, our mellow T will immediately change. 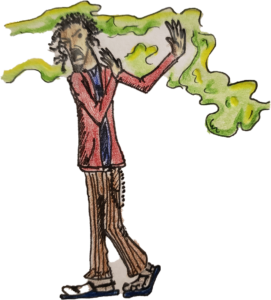 Well, T may be cool on the outside, but inside he can be a boiling cauldron of fury. Bubba’s malodorous 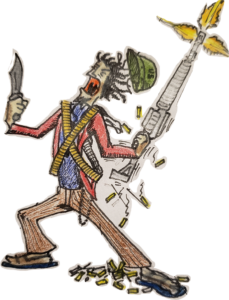 effluvium will have one of two effects on our Naïve T. On one hand, T can become really pissed that there has been an attack by a bunch of hoodlum Badass V’s and, like The Hulk, turn into a T Helper cell 1 and unleash a can of whoopass inflammation (cytokines, which means ‘cell movers’) which calls in attack soldier cells of every sort, each releasing more and more pro-inflammatory cytokines, a veritable conflagration of unfettered whoopastomp.

On the other hand, Naïve T can be influenced by an outside advisor, (cytokine interleukin 4) which transforms Naïve T into a T Helper cell 2. Cyto 4 says, “Hey man, CHILL.  Let’s surreptitiously let loose some cytokines (interleukins 4 and 5) on your friend, the otherwise uninvolved bystander Lympho B (B lymphocyte) to secrete a chemical attack with antibodies specific for dissolving Badass V’s.” “You can just quietly stay behind the lines and watch Badass V dissolve away. And Big Bubba will gobble up what’s left.” So T Helper 2, the immune cell formerly known as Naïve T, sits back and does exactly that, while also secreting another cytokine (interleukin 10) which acts on T Helper 1 to constrain some of his inflammatory ire.

So with that erudite summary of immunology, only one thing is lacking. How does stoner Naïve T decide which way he’ll swing? Which identity will he assume, the furious pro-inflammatory Hulk or the cool, calculating anti-inflammatory strategist?

Isn’t this fun? It’s like a bedtime story with a message. Watch this. This is really great!

Well, our Big Bubba has a lot more to him than his friends realize. He is much more than a wind-passing party buffoon. He has these “skills”. He has enzymes. There is one of these that can secretly convert inactive vitamin D to its active form, calcitriol. Other than the liver and kidney, the macrophage alone can activate D. But Bubba brings even more to the party. Bubba’s macrophage DNA, after being stimulated by activated D, makes proteins cathelicidin and beta defensin. Cathelicidin is like a trumpet call to gather the troops of immune cells. It draws them in from all over, T cells, B cells, more Bubbas and these start multiplying and are activated for the fight. Cathelicidin also increases Bubba’s appetite. Macrophages increase their ‘viral eating’ when stimulated by cathelicidin. At the same time beta defensin starts poking holes in the viral capsules so they die. All this from vitamin D.

But here’s the most important point, because remember, we want to prevent the cytokine storm.

So vitamin D should drive the immune system to more efficiently kill the invaders AND to do it with much less inflammation, that is, without the storm. Whether it’s influenza A, B, Sars of all types, every year D is our Defense.

And that’s the short version…

And finally, everyone knows a bedtime story should have a moral or teach a lesson. Here it is:

As we have been designed to be a perfect symphony of chemistry, chemistry that is so complex as to generate electricity, to reproduce and regenerate itself and the organism, and to contend not only with invaders but also with insurgents, it is incumbent on clinicians and scientists to understand its intricacies  and subtleties in order to effect desired benefit. Restating that: This knowledge grants us the ability to exploit and manipulate our own biochemistry and biology of cells and systems to enhance and direct the electrical charges in cells and synapses, to repair cellular and structural damage done to the organism, and to prevent and protect us from outside attacks and, as in the case of autoimmune disease, attacks from inside. There is so much more, but this is about D.